Connecting current events to the past: The Dawn Raids

On 1 August 2021 the Prime Minister, Rt. Hon. Jacinda Ardern, apologised to New Zealand’s Pacific communities for the Government’s implementation of the immigration laws of the 1970s that led to the events of the Dawn Raids. In her apology, the Prime Minister stated that the past actions of the Crown were wrong and acknowledged the distress and hurt that they have caused to generations of Pacific New Zealanders.
Download PDF | 283KB 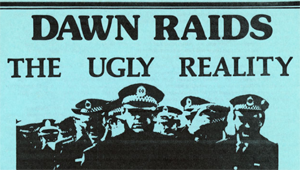 The Dawn Raids story is part of a wider narrative about the settlement and experiences of Pacific people in Aotearoa New Zealand and the exercise and effects of power. Kaiako and ākonga can use this story as an entry point for learning about: